Effective tomorrow, 03/25/2020, Dr. Kelsea Skidmore will be available for urgent eye care, by appointment only. No routine eye care will be addressed at this time. If you are in need, contact the office at 713-349-0224 and info@familyvisionsolutions.com. Your continued patience is appreciated as we are not yet back to our normal operations.

Balancing state, federal, and health expert guidelines may become increasingly difficult as this pandemic continues. We will continue to monitor the situation and send updates as they arise. As we make decisions, the health and safety of patients and staff will be our top priority.

UPDATE: For those who are also cared for by the surgeons at Houston Eye Associates, I have recently learned that they will have doctors available for emergency care as well, should you need them.

Health and Peace, Doctors and Staff 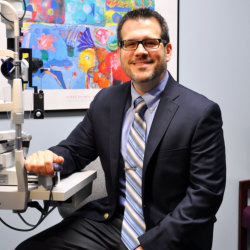 Aside from his career in the United States Navy, Dr. Charrier has lived in southeast Texas his whole life.  He holds two bachelors degrees in Music and Biology and earned a Doctor of Optometry degree from the University of Houston.  He is a Diplomate in the Cornea, Contact Lenses and Refractive Technologies section of the American Academy of Optometry, an earned distinction held by less than 1% of optometrists in the United States.

As a naval officer, Dr. Charrier served as Director of the Specialty Contact Lens Clinic at the Naval Hospital in San Diego, California.  While there, he served military members and their families in comprehensive and medical eye care as well as fit medically necessary contact lenses on patients with eye disease or trauma from the battlefield.

Dr. Charrier’s experience in specialty contact lens fitting is truly impressive.  During his time at the Naval Hospital, his success in treating highly complex patients caused his patient base to expand over nine states and the south pacific.

In his time at the Naval hospital, Dr. Charrier routinely treated patients suffering from war injuries, traumatic brain injuries and corneal diseases.  Furthermore, he served as an optometrist to our nation’s elite warfighters and pilots including SEALS and the famous Blue Angels.

In his career, Dr. Charrier has treated thousands of complicated patients and continues to have one of the largest specialty contact lens practices in the country.

Since leaving the Navy, Dr. Charrier has become an important referral source for Houston area optometrists and ophthalmologists in helping complicated patients see clearly and comfortably.

Additionally, Dr. Charrier served as faculty to the ophthalmology department providing lectures on optics and contact lenses as well as clinical rotations for the residents.  Dr. Charrier was awarded the Navy and Marine Corps Commendation Medal for his work with the residents. He served as a voting member of the Naval Medical Center’s Executive Committee of the Medical Staff and was selected as Division Officer for the Optometry Department. 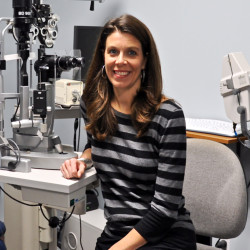 Dr. Karen joined the practice in 2000 when it was under the name Ebling Eye Care.  She is the recipient of several awards including the Vistakon Award of Excellence in patient care.  Previously part of a successful ophthalmology practice, Dr. Karen has extensive experience in ocular pathology and pre and post-surgical eye care.

Additionally, Dr. Karen served as Associate Professor at the University of Houston College of Optometry from 2000-2009.  As a busy mother of three, she currently sees patients part-time with a concentration on comprehensive routine and medical eye care. 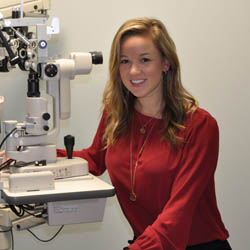 Dr. Skidmore is a therapeutic optometrist and optometric glaucoma specialist. She is trained in the medical management of a variety of ocular conditions including conditions such as glaucoma, dry eye disease, macular degeneration, and corneal disease. In addition to providing patient care at Family Vision Solutions, she also conducts clinical research studies at the University of Houston College of Optometry.

Dr. Skidmore offers comprehensive vision and medical eye exams for patients 6 months and older.  She specializes in medically necessary contact lenses and challenging cases including keratoconus, post-LASIK complications, and irregular corneas.  She is certified in corneal reshaping technology (CRT) as a non-surgical alternative to LASIK.  New research is showing exciting support for CRT in slowing the progression of myopia (nearsightedness).

What our Houston Eye Doctors Have to Say...

At our Houston eye care clinic, we handle everything from adult and children’s eye exams and hard-to-fit contact lenses, to eye emergencies, treatment of eye diseases and co-management of eye surgery such as LASIK.

Expert eye care solutions should be convenient and easy, and we excel in serving all your vision needs while maximizing the convenience. We are devoted to helping you maximize your vision, so you can enjoy the highest quality of life!

Please call our office at: 713-349-0224 for further instructions. Use your best judgment on urgency, if you feel the need to find the nearest emergency room.

If you experience loss of vision, double vision, swelling, infection or any eye emergency, contact us immediately for guidance. We’ll help you with the best treatment to prevent complications and promote long-lasting clear eyesight.